To what does redevelopment refer?

Redevelopment options vary as much as brownfield types. Redevelopment opportunities depend on factors such as the type and extent of contamination, the land’s location and value, and the ability of the property owner, potential developer and municipality to agree on a vision for the site and receive the required provincial approvals.

The ideal is for a brownfield site to be fully remediated and redeveloped with a permanent commercial, industrial or residential structure. Still, interim uses such as parks, parking lots and even solar farms can contribute to improving site’s aesthetics and enable some economic development in cases where full remediation may not be possible. For larger brownfields, some municipalities are pursuing opportunities to divide the site into sections in order to fully redevelop areas not affected by contamination while having interim uses on other areas to allow access for monitoring and remediation. See the section, Brownfield Case Studies for more information.

Why is brownfield redevelopment so important?

Brownfields are a tangible barrier to the development, growth and sustainability of a community. Alberta Municipalities has been a steadfast advocate for regulation changes, funding options, and strategic planning to streamline the remediation and redevelopment of Brownfields.

What are the barriers to redevelopment? 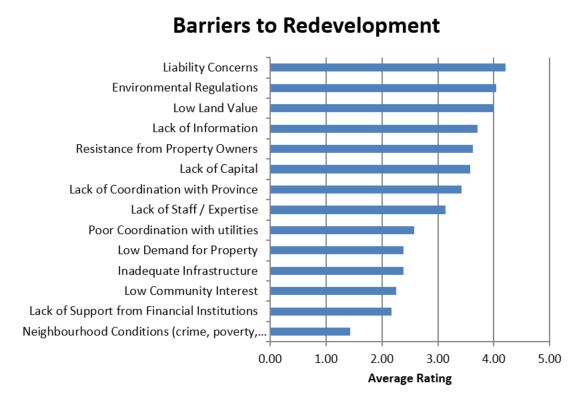 Respondents to Alberta Municipalities' Brownfield Impact Assessment were asked to rank barriers to redevelopment from zero to five, where zero indicates the barrier has no significance and five indicates extreme significance.

These findings mirror the conclusions of the Brownfield Redevelopment Working Group, made up of representatives from Alberta Municipalities, RMA, municipalities, the province and industry - whose 2012 report indicates that without some certainty regarding future regulatory liability, it is not possible to assess the financial feasibility of a redevelopment project. The unknown risks of liability often create anxiety in current owners, potential purchasers and developers and limit potential for redevelopment. This uncertainty can also inhibit a lender’s willingness to take the property as security, which given the cost of real estate development, creates an even larger barrier. For more details on liability, see the section What is liability?

Site redevelopment usually comes down to financial feasibility—that is, whether the potential revenues are greater than the costs. This is particularly challenging with small brownfield sites, such as former gas stations or drycleaners, with limited development potential.

Municipalities can assist with improving the financial feasibility of brownfield redevelopment by utilizing the new multi-year tax reduction, cancellation, or deferral tool enabled by Municipal Government Act amendments. This tool allows local governments to temporarily reduce the risk of redevelopment for developers while they carry out remediation and construction work. For more information, see the section Brownfield Regulations.

Ownership of brownfields complicates remediation efforts. The majority of brownfields remain under private ownership, and the cost/benefit ratio for remediation is influenced by the cost of paying property tax on a contaminated site compared to paying for a site cleanup. Even if a municipality had the will to step in and purchase the property, private owners are highly cognizant of future liability claims so will often instead choose to pay the tax and hold the site.

Respondents to Alberta Municipalities' Brownfield Impact Assessment were asked, “who are the property owners for brownfield sites in your municipality?” The above graph presents the average response.

“The private ownership model allows brownfield owners to make decisions that negatively impact neighboring businesses/communities while still complying with legal/environmental requirements of the province. The resulting brownfields lead to conspicuous gaps in communities for decades.”

“It is a constant battle with very little onus on the land owners to reclaim, no authority at municipal level for brownfields and no help from Alberta Environment to force clean up. These owners have pulled millions out of a community and have now left an eye sore of underutilized prime commercial land”

“The owners of two sites have refused to pay taxes hoping that the Town will take the property in a tax sale and thus get the liability.”

“The City owns two parcels of land in the downtown which have been actively marketed for several years without a final sale agreement. The estimated cost of remediation is equal to or exceeds the land. The City would be fortunate to sell the land for no revenue or will have to look at some type of incentive, which are very limited under Alberta legislation.”
Respondents to Alberta Municipalities' Brownfield Impact Assessment