Alberta’s watersheds are vast and are vitally important to our way of life.

Alberta’s watersheds are vast and are vitally important to our way of life. Everything within a watershed is connected. Changes that happen within a watershed have huge effects on everything living within it, even if those changes are hundreds of kilometres away. For instance, land pollution in the Rocky Mountains could leach into rivers and lakes, impacting drinking water supplies on the other side of the province in Lloydminster. Alberta’s watersheds also flow into our neighbours’ lands on all sides, making our actions in protecting them important on an interprovincial, and international level.

Choose one of the accordions below to find out more about specific areas of watershed management:

How are watersheds managed in Alberta?

Alberta’s watersheds are split geographically, depending on where water flows. Each watershed is managed by one of eleven Watershed Planning and Advisory Councils (WPACs) in the province. WPACs are responsible for engaging partners and stakeholders in their basin area, including municipal, provincial and federal governments, industrial sectors, conservation groups, aboriginal communities, and the public. For more information about WPACs in Alberta, please visit the Government of Alberta’s Water for Life site.

Below is a map of Alberta’s Watershed Planning and Advisory Councils: 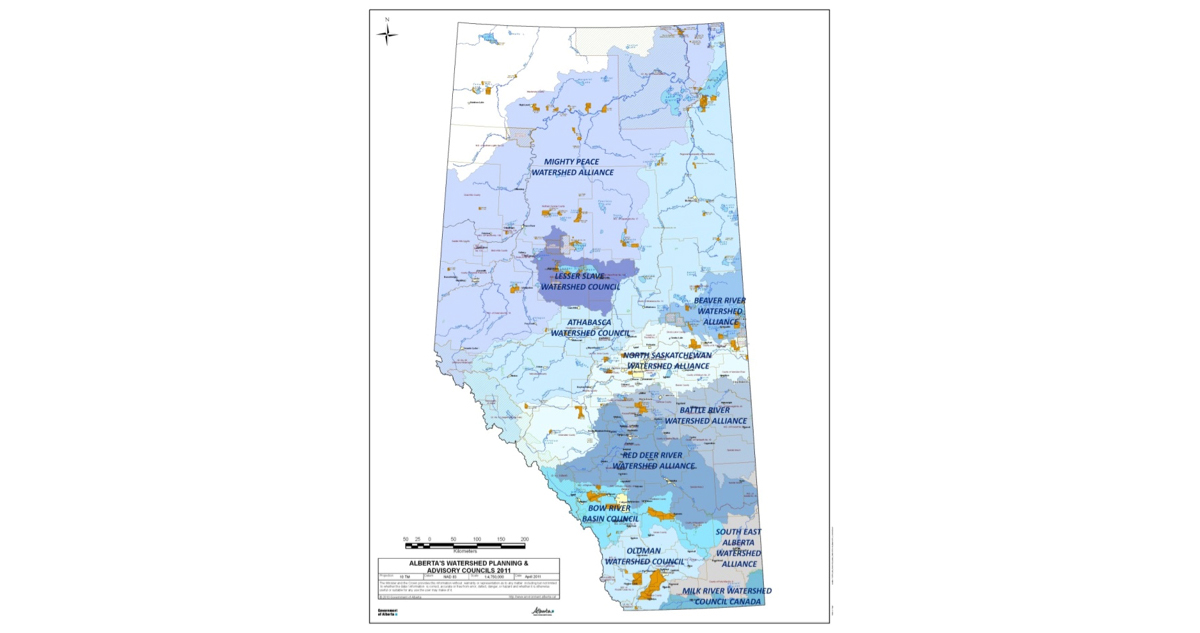 One of the most important ways that we can effectively manage our water is to change the way we manage our land. Land use has many impacts on our watersheds, from encroachment of development on riparian areas and wetlands to creation of impervious surfaces that cause stormwater issues to environmentally damaging uses that leech contaminants into our groundwater. It is vitally important to combine land use management with watershed management to ensure that both our land and water are protected.

What are Aquatic Invasive Species?

Invasive species are plants or animals that are not native to a specific location, but once introduced, they have a tendency to spread and create ecosystem imbalance. Some aquatic invasive species are threatening to invade Alberta waters, with the potential to cause major damage to the environment and our economy.

Why is it important to combat the invasion?

Dreissenid mussels originated in the Black Sea region and have spread throughout many parts of the world by colonizing boats that travel between different regions. Zebra mussels first appeared in the Great Lakes in 1988 and have become a constant problem for affected provinces and municipalities. Currently, Dreissenid mussels have spread as far as Lake Winnipeg in Manitoba and threaten to spread further into Saskatchewan and Alberta.

If Dreissenid mussels were to invade Alberta, municipalities would begin to face major economic pressures to deal with the impact of the species on local water infrastructure. Ontario municipalities already affected by the mussels have reported costs as high as $3 million per water plant to combat them.

In addition to Dreissenid mussels, Eurasian Water Milfoil is threatening water bodies in Alberta. Water milfoil is an aquatic, submersed herb that forms large, floating mats, preventing light penetration into water bodies, shading out native plants and reducing oxygen levels in the water. It was introduced to North America in the 19th century and is now one of the most widely distributed aquatic invasive plants on the continent.

Eurasian Water Milfoil has a number of impacts, including reducing biodiversity, killing fish due to reduced oxygen, and hindering recreational activities such as swimming, boating and fishing. In addition, dense patches of the plant can cause stagnant water that is an ideal breeding environment for mosquitoes

Alberta is home to many lakes of various sizes, the majority of which are in the northern half of the province. Lakes are one of our province’s important water sources, being used to support municipal water use, irrigation, industrial use, and hydropower production. Lakes are also used for recreation, sport fishing, and as important biodiverse habitats. All of these uses make them an important part of our watershed systems.

Most of Alberta’s lakes are naturally rich in nutrients but can be negatively impacted when additional nutrients are added. Changes in nutrient levels can alter water quality and aquatic communities, cause algae blooms or aquatic plant growth, and ultimately make lakes less healthy and less aesthetically appealing. Variation in nutrient levels can happen due to changes in land cover, shoreline development, wastewater leakage, agricultural activity, vegetation removal, or stormwater runoff from urban areas. This means that municipalities have a large role to play in lake management.

Alberta Environment and Parks has proposed the creation of a provincial framework to guide lake management decisions, which would:

Riparian areas are the places where the water and land meet and interact, giving them unique soil and vegetation qualities, and a vitally important place in watershed management. Riparian areas are important for several reasons: they help regulate water quality, manage flood water, stabilize riverbanks and shorelines, and provide essential habitats for plants and animals. This makes these special ecosystems very important to municipalities by protecting the water supply, preventing damaging erosion, and securing infrastructure, property and people against floods.

“Riparian lands are transitional areas between upland and aquatic ecosystems. They have variable width and extent above and below ground and perform various functions. These lands are influenced by and exert an influence on associated water bodies, including alluvial aquifers and floodplains. Riparian lands usually have soil, biological, and other physical characteristics that reflect the influence of water and hydrological processes.”

To function effectively, riparian areas need to be healthy. Unfortunately, development is putting many of these areas across the province at risk. Development in riparian areas can compromise riparian function, causing alterations in drainage, decreased bank or shoreline stability, increased pollutants, and more. This makes riparian area management an important task for municipalities.

Source water is untreated water that is used to provide public drinking water and supply wells used for human consumption. Alberta’s water sources include lakes, rivers, streams, wetlands, glaciers, and groundwater, all of which are sustained by watersheds and recharge areas in an interconnected cycle. Alberta’s rapid population growth, continued development pressures, and changing climate are all challenges contributing to the increasing pressure to maintain these sources.

Source water is threatened by many contaminants including viruses and bacteria from sewage or septic systems, salts and metals that enter the water supply in industrial or domestic wastewater, pesticides and herbicides from agriculture or residential use, organic by-products from industrial processes or gas stations, or even radioactive contaminants from oil and gas production or mining. In Alberta, source water protection is included in several acts and regulations, including:

Though there are many regulations designed to protect source water, protection efforts are still a challenge. To be effective, source water protection needs to happen at a watershed level. Contamination of water in one part of a watershed can quickly affect water throughout the watershed. For instance, contamination of water from agricultural use or oil and gas production on one side of the province can impact communities that draw water hundreds of kilometres downstream.

Stormwater is any water that flows over land and impervious surfaces during rainfall and snowmelt events. In natural environments, stormwater is filtered by vegetation and “infiltrates”, or seeps into the ground. These processes slow runoff rates and remove pollutants before stormwater returns to surface and groundwater sources.

As natural areas become urbanized, changes in landscape properties and land development contribute to increased runoff rates, larger stormwater volumes, and the accumulation of pollutants and sediments. This is largely because impervious surfaces such as parking areas and roads prevent the water from infiltrating the ground. As this runoff flows across the land, water quality deteriorates as sediment, heavy metals, hydrocarbons, pesticides, and other pollutants accumulate.

These impacts are very concerning to municipalities across Alberta.

Wetlands are natural areas where water is the dominant factor determining soil development and the types of plant and animal communities living there. Types of wetlands vary widely given local differences in soils, climate, hydrology, and other factors. To learn more about wetlands in Alberta, visit Wetlands Alberta.

Why are wetlands important?

Wetlands are among the richest ecosystems on earth. They are home to a huge variety of plant and animal species such as dragonflies, ducks, and elk, and are vital to protecting biodiversity. In addition, wetlands behave as natural filters. They trap sediment and pollutants like heavy metals and excess nutrients in runoff. A healthy wetland can reduce nitrate and phosphorus levels by up to 80% and 94% respectively. This makes them extremely important to protecting drinking water supplies.

Wetlands also act as a water storage system, which makes them very useful in mitigating floods and droughts. Protecting wetlands as a flood mitigation mechanism can also save municipalities valuable resources that would otherwise need to be spent on flood infrastructure.

In addition to these environmental benefits, wetlands also make social and economic contributions to our society. They provide opportunities for tourism, boating, bird watching, photography, hunting and fishing. They also have a major positive impact on property values by contributing to aesthetic appeal and amenities.

Unfortunately, over the past 100 years, more than 60 percent of Alberta’s wetlands have been destroyed, and we continue to lose wetlands at a rate of 0.5 percent per year.